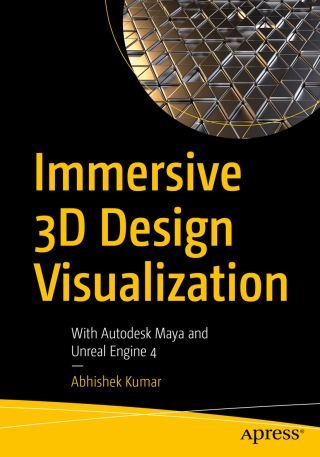 With Autodesk Maya and Unreal Engine 4

You’ll to dive into design and visualization, from planning to execution. You will start with the basics, such as an introduction to design visualization as well as to the software you will be using. You will next learn to create assets such as virtual worlds and texturing, and integrate them with Unreal Engine 4. Finally, there is a capstone project for you to make your own immersive visualization scene.

By the end of the book you’ll be able to create assets for use in industries such as game development, entertainment, architecture, design engineering, and digital education.

Beginning-intermediate learners from the fields of animation, visual art, and computer graphics as well as design visualization, game technology, and virtual reality integration.

Dr. Abhishek Kumar is an assistant professor in the Department of Computer Science at the Institute of Science at Banaras Hindu University. He is an Apple Certified Associate, Adobe Education Trainer, and certified by Autodesk. He is actively involved in course development in animation and design engineering courses for various institutions and universities as they will be a future industry requirement. Dr. Kumar has published a number of research papers indexed in Scopus and Web of Science and covered a wide range of topics in various digital scientific areas (image analysis, visual identity, graphics, digital photography, motion graphics, 3D animation, visual effects, editing, and composition).

He holds eight patents in the field of computer science, design and IoT. Dr. Kumar has completed professional studies related to animation, computer graphics, virtual reality, stereoscopy, filmmaking, visual effects, and photography from Norwich University of the Arts, the University of Edinburgh, and Wizcraft MIME and FXPHD, Australia.

He is passionate about the media and entertainment industry, and has directed two animation short films. Dr. Kumar has trained more than 50,000 students across the globe from 153 countries (top five: India, Germany, United States, Spain, and Australia). His alumni have worked on movies such as Ra-One, Krissh, Dhoom, Life of Pi, the Avengers series, the Iron Man series, GI Joe 3D, 300, Alvin and the Chipmunks, Prince of Persia, Titanic 3D, the Transformers series, Bahubali 1 and 2, London Has Fallen, Warcraft, Aquaman 3D, Alita, and more.