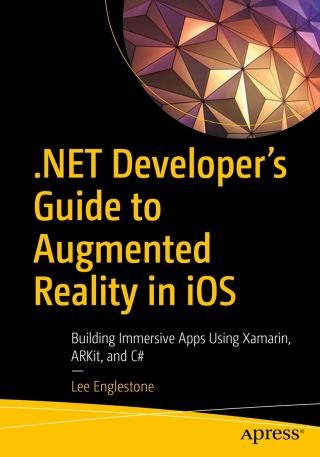 Attention .NET developers, here is your starting point for learning how to create and publish augmented reality (AR) apps for iOS devices.

This book introduces and explores iOS augmented reality mobile app development specifically for .NET developers. The continued adoption and popularity of Xamarin, a tool that allows cross-platform mobile application development, opens up many app publishing opportunities to .NET developers that were never before possible, including AR development.

You will use Xamarin to target Apple’s augmented reality framework, ARKit, to develop augmented reality apps in the language you prefer—C#. Begin your journey with a foundational introduction to augmented reality, ARKit, Xamarin, and .NET. You will learn how this remarkable collaboration of technologies can produce fantastic experiences, many of them never before tried by .NET developers. From there you will dive into the fundamentals and then explore various topics and AR features. Throughout your learning, proof of concepts will be demonstrated to reinforce learning.

Developers who want to learn how to use .NET and C# to create augmented reality apps for iOS devices. It is recommended that developers have some Xamarin experience and are aware of the cross-platform options available to .NET. A paid Apple developer account is not needed to experiment with the AR code samples on your devices.

Lee Englestone is an innovative, hands-on software development manager and technical lead, based in Stockport, England. He has been a .NET developer for many years, writing code for Windows, web, mobile, cloud, and augmented reality applications in his spare time. He believes that there are many new exciting opportunities for developers in the area of augmented reality and is excited to share them with his fellow .NET developers. In recognition of his community contributions, he has been awarded a Microsoft MVP in Developer Technologies.