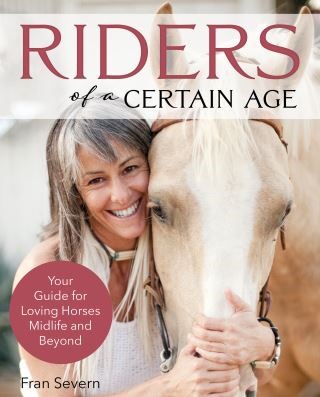 Riders of a Certain Age

Your Go-To Guide for Loving Horses Mid-Life and Beyond

Fran Severn is a freelance writer and broadcaster who grew up in the city but was determined to get horses in her life. After earning her degree in Mass Communications, she worked in broadcast news in Louisville, Kentucky, where she covered the Kentucky Derby, events at the Kentucky Horse Park, produced equine-focused features, and finally bought her first horse. Moving to England with her Air Force husband, she discovered dressage and continued her training when she returned to the states. Her work has appeared in USDF Connection, Newsday, The Trail Rider, Western Horseman, Dog Fancy, and Games. She’s written about the exclusive “tailgate” party at the Royal Enclosure at the Ascot races, shipping horses to the Olympics, riding on Civil War battlefields, and the chuckwagon races at the Calgary Stampede. A past president of the Eastern Shore Writers Association and former PR Director for the Maryland Office of Tourism Development, she lives on Maryland’s Eastern Shore, where she enjoys riding on the beaches and trails and promoting local equine activities and businesses and travel to the region.