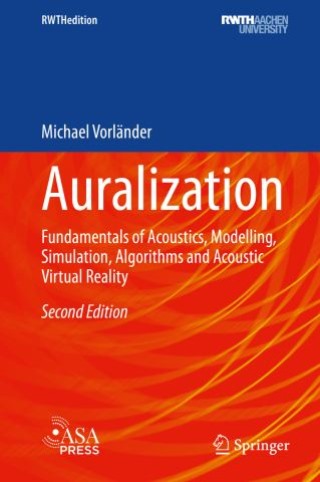 Auralization is the technique of creation and reproduction of sound on the basis of computer data. With this tool it is possible to predict the character of sound signals which are generated at the source and modified by reinforcement, propagation and transmission in systems such as rooms, buildings, vehicles or other technical devices. This book is organized as a comprehensive collection of the basics of sound and vibration, acoustic modelling, simulation, signal processing and audio reproduction. With some mathematical prerequisites, the readers will be able to follow the main strategy of auralization easily and work out their own implementations of auralization in various fields of application in architectural acoustics, acoustic engineering, sound design and virtual reality. For readers interested in basic research, the technique of auralization may be useful to create sound stimuli for specific investigations in linguistic, medical, neurological and psychological research, and in the field of human-machine interaction.

Michael Vorländer: Michael Vorländer is Professor at RWTH Aachen University. Since 1996, he is Professor and Director of the Institute of Technical Acoustics at RWTH Aachen University, one of the Universities of Excellence in Germany. Michael Vorländer served as President of the German Acoustical Society (DEGA), of the European Acoustics Association (EAA), and of the International Commission for Acoustics (ICA). His research focus is auralization and acoustic virtual reality in its various applications in psychoacoustics, room and building acoustics, automotive and noise control.