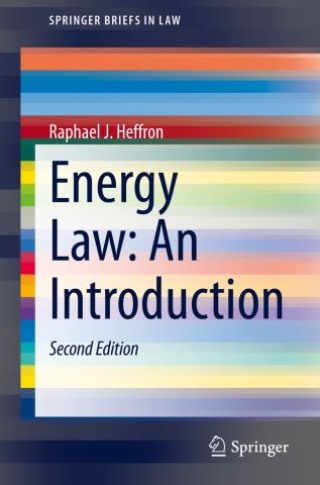 The aim of this short text is simply to introduce a reader to this topic. It is intended for a global audience and rather than being restricted to potential energy law students of a particular country. It is also written for students of other disciplines such as geographers, social scientists and engineers. It should also be engaging to those in a variety of professional practices who want an accessible background to and overview of the subject.

The first edition of Energy Law: An Introduction was a great success and this extended second edition is expected to be just as successful. It is used widely as a core text in energy law courses across the world and this second issue adds further discussion on important topics such as energy law principles and drivers. Further, it highlights issues of energy justice, a growing and an emergent topic which is also at the core of the energy law principles and the key drivers of why new energy law is formulated.

The text aims to outline the principles and central logic behind energy law. Therefore, readers from across the world should be able to use it as a guide to thinking about energy law in their own countries. A variety of examples from many different countries are included in the text and while examples and comparisons are mainly from the EU and US, they represent good examples of more advanced and innovative energy law.

For those readers who seek further or more in-depth knowledge, this text will only serve as an introduction. However, a key focus of the book is to direct the reader where they to look for further information and within the book there are suggested extra readings, the key recommended journals to read and other sources of information based on institutions who publish further material in this area.

Overall this second edition of Energy Law: An Introduction aims to inspire students and others to contribute to try and improve energy law across the world and enable us all to contribute in our own small way to delivering a just and sustainable energy world for future generations.

Professor Heffron is Professor for Global Energy Law & Sustainability at the Centre for Energy, Petroleum and Mineral Law and Policy at the University of Dundee. As of July 2019 he is also Jean Monnet Professor in the Just Transition to a Low-Carbon Economy awarded by the European Commission. In 2020, he was also appointed as Senior Counsel at Janson law firm in Brussels (Belgium). Professor Heffron is a qualified Barrister-at-Law, and a graduate of both Oxford (MSc) and Cambridge (MPhil & PhD). His work all has a principal focus on achieving a just transition to a low-carbon economy, and combines a mix of energy law, policy, management and economics. He has published over 140 publications of different types and is the most cited scholar in his field worldwide (1360+Scopus). Professor Heffron has given just over 135 keynote or guest lectures in 49 countries worldwide.

Raphael’s energy research has involved funding from UK national research councils (the ESRC and the EPSRC), the EU and currently through the European Commission Jean Monnet Professorship 2019-2022, UK Department for Business, Energy and Industrial Strategy (ERA-ACTOM) and the British Academy. Raphael was elected to the Royal Society of Edinburgh Young Academy of Scotland in 2018. His research and teaching has been recognised by the award of a Jean Monnet Professorship by the European Commission twice in 2016 (-2019) and 2019 (-2022). His teaching has also been recognised in the UK by becoming a Senior Fellow of the UK Higher Education Academy in 2018. He is a reviewer for the next IPCC Report. Raphael is on the Editorial Board of the International Energy Law Review, the Renewable Energy Law and Policy Review and is Consulting Editor of the current Halsbury’s Laws of England volumes on Energy Law (the leading practitioner energy law series). Raphael is also Editor-in-Chief of the Edinburgh University Press journal Global Energy Law & Sustainability.