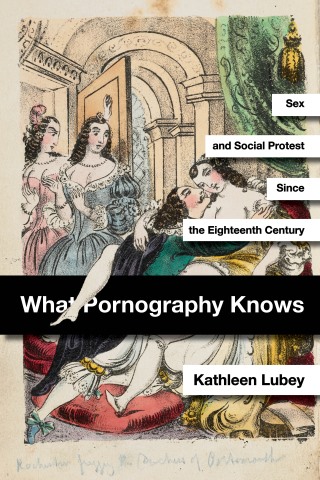 Sex and Social Protest since the Eighteenth Century

What Pornography Knows offers a new history of pornography based on forgotten bawdy fiction of the eighteenth century, its nineteenth-century republication, and its appearance in 1960s paperbacks. Through close textual study, Lubey shows how these texts were edited across time to become what we think pornography is—a genre focused primarily on sex. Originally, they were far more variable, joining speculative philosophy and feminist theory to sexual description. Lubey's readings show that pornography always had a social consciousness—that it knew, long before anti-pornography feminists said it, that women and nonbinary people are disadvantaged by a society that grants sexual privilege to men. Rather than glorify this inequity, Lubey argues, the genre's central task has historically been to expose its artifice and envision social reform. Centering women's bodies, pornography refuses to divert its focus from genital action, forcing readers to connect sex with its social outcomes. Lubey offers a surprising take on a deeply misunderstood cultural form: pornography transforms sexual description into feminist commentary, revealing the genre's deep knowledge of how social inequities are perpetuated as well as its plans for how to rectify them.

Kathleen Lubey: Kathleen Lubey is Professor of English at St. John's University. She is the author of Excitable Imaginations: Eroticism and Reading in Britain, 1660-1760 (2012).