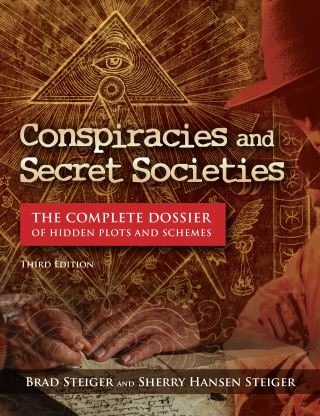 The Complete Dossier of Hidden Plots and Schemes

Award-winning writer Brad Steiger devoted his life to exploring and examining unusual, hidden, secret, and otherwise strange occurrences. Steiger first began publishing articles on the unexplained in 1956; since then, he wrote more than 2,000 paranormal-themed articles. He authored more than 200 titles with over 17 million copies in print, including Real Encounters, Different Dimensions and Otherworldy Beings; Real Aliens, Space Beings, and Creatures from Other Worlds; Real Visitors, Voices from Beyond, and Parallel Dimensions; Real Ghosts, Restless Spirits, and Haunted Places; Real Monsters, Gruesome Critters, and Beasts from the Darkside; The Werewolf Book; and many more.

Sherry Hansen Steiger authored or coauthored more than 40 books, including the inspirational and best-selling “Miracles” series. She was married to Brad Steiger. They are survived by two sons, three daughters, and ten grandchildren, who miss them very much.

|||Kevin Hile has had a long career as an author, editor, and researcher. He authored several books, including Visible Ink Press' The Handy California Answer Book, and he has edited many other of Visible Ink Press’ meticulously researched reference titles, including Brad and Sherry Steiger’s 2012 edition of Conspiracies and Secret Societies. He lives in Southern California.