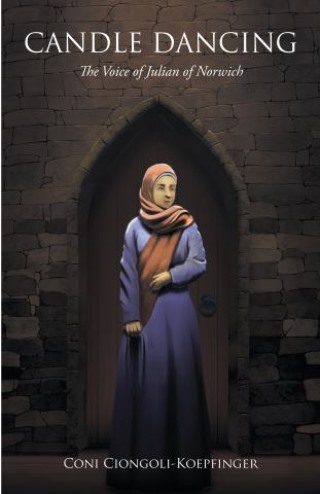 The Voice of Julian of Norwich

Playwright Coni Koepfinger is the host of AIRPLAY, now in its 12th season, gives voice to actors and writers from all over the world. In addition to teaching theatre and composition, Koepfinger is an internationally produced playwright and theorist. As Media Advisor for the Lifeboat Foundation, her Get the Message appeared in their Visions of the Future anthology. Recent work includes three new powerful pieces with Joe Izen including Eve of Beltane a fresh look at political corruption in the face of ancient mythology at Broadway Bound Festival. As a NYC Indie Theatre artist, Coni has written well over 40 plays, short stories, books and commissions for groups like THE ME TOO PROJECT; UNTOLD STORIES OF JEWISH WOMEN, COSMIC ORCHID and THEATRE FOR THE NEW CITY. In 2020 Koepfinger work has been seen virtually worldwide with My Dinner with Mary, read online with The Producer’s Circle, and was later live-streamed from legendary The Player’s Club in NYC and will run in 2021 in the Dream Up Festival. Her play, Simon Says, won placement in PLAYBILL’S first ever Virtual Theatre Festival in 2020 and is slated for Manhattan Rep’s STORIES film competition in 2021.

WHEN YOU ASK GOD TO BE YOUR DANCE PARTNER…

"Candledancing weaves a medieval myth that allows us to envision ‘spiritual horizons’ knowing that the garment made will, like a baptismal garment, cover the ‘new person,’ the one reborn into higher consciousness." Stephen Steinbeiser, Duquesne University

"a well-developed, lyrical, important play. Koepfinger has a mission here that’s clear and sincere. The playwright’s strength is the passion of her dialogue." Pittsburgh Post-Gazette

"It was like nothing I had ever read before… I thought it would make brilliant theater. I started having all these visual pictures of how it might go." Robert Hugill, London

London Composer Robert Hugill is quite prolific. Operas include  Garrett (based on a play by Coni Ciongoli-Koepfinger, 2001 at Hoxton Hall, When a Man Knows (based on a play by Alan Richardson, 2010 and staged at Hoxton Hall in 2011), The Genesis of Frankenstein (based on Mary Shelley’s novel, premiered in 2016) and The Gardeners, to a libretto by Joanna Wyld, which premiered at Conway Hall in 2019. Robert’s choral music includes six masses, ranging from two-part choir with organ to large-scale unaccompanied masses, and many anthems and motets. His sequence of 70 motets for the Church’s year, Tempus per Annum sets the Latin Introits for Sundays and major feasts. Robert’s larger scale choral pieces include a Passion setting for unaccompanied vocal ensemble, written for The Burgundian Cadence, and a sequence of large-scale didactic cantatas, plus a choral setting of extracts from Archbishop Cranmer’s final speech, The Testament of Dr Cranmer, which was recorded on the Divine Art label, and settings of Ruth Padel’s Learning to Make an Oudh in Nazareth. The Black Dragon, commissioned by London Concord Singers for the Millennium Year of the Dragon (2000), is being performed again by them in 2019. The piece sets Robert’s own Science-Fiction inspired text. Robert’s song cycles includes cycles setting poems by A.E. Housman, Ivor Gurney, Christina Rosetti, Rowan Williams, Hart Crane and Rabindranath Tagore.