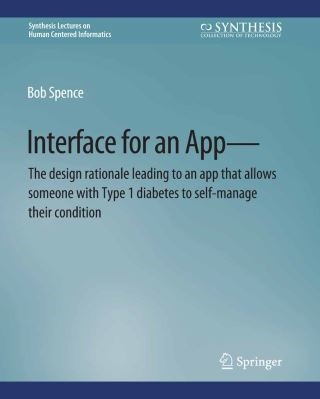 This book is an account of how I addressed the need for a smartphone app that would allow someone with Type 1 diabetes to self-manage their condition.

Its presentation highlights the major features of the app’s interface design. They include the selection of metaphors appropriate to a user’s need to form a mental model of the app; the importance of visible context; the benefits of consistency; and considerations of a user’s cognitive and perceptual abilities. The latter is a key feature of the book.

But the book is also about the design process, and especially about the valuable contributions made by the many focus group meetings in which design ideas were first presented to people with Type 1 diabetes. Their critique, and sometimes their rejection, of interface ideas were crucial to the development of the app.

I hope this book will prove useful for teaching and design guidance.

Bob Spence: Bob Spence is Professor Emeritus of Information Engineering, and Senior Research Investigator, at Imperial College London. Following a 2-year postdoctoral experience at General Dynamics/Electronics in the USA he came to Imperial College in 1962, first as a Lecturer with interests in circuit theory. He is, in fact, a co-author of the classic Tellegen’s Theorem (MIT Press, 1970) which powerfully generalizes the original form of that unusual theorem. But it was the emergence of interactive computer graphics in the 1960s that triggered interest in the actual user of that technology and, hence, in Human-computer Interaction, a field of life-long interest and of which he is a pioneer. In this context Bob has been the co-architect of a number of tools: first MINNIE (a powerful graphic front-end for circuit designers), then a CAD system exploiting Artificial Intelligence and, during the last two years, the interface of a hand-held device supporting the self-management of Type-1 diabetes, the topic of this book. At the same time Bob co-invented the fish-eye lens as well as a collection of Exploration tools and a new notation for interactive systems and has collaborated extensively on research into Rapid Serial Visual Presentation. His undergraduate teaching, which he enjoys, reflects his long-standing interest in Information Visualization, which has led to three editions of his book Information Visualization. He regularly presents workshops on Design for Information Visualization in Italy, Portugal, The Netherlands and elsewhere. Bob’s research has led to the award of three higher doctorates: on Circuit Theory (University of London, 1984), Interaction Design (Royal College of Art, 1995) and Interactive Visual Artefacts (Imperial College, 2018). He was elected into the Fellowship of the Royal Academy of Engineering, the equivalent of the US National Academy of Engineering, in 1991.