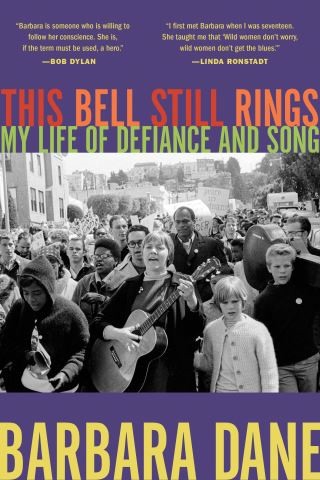 My Life of Defiance and Song

The autobiography of a courageous singer-songwriter, activist, and American icon.

"Barbara Dane is someone who is willing to follow her conscience. She is, if the term must be used, a hero."—Bob Dylan

A renowned folk, blues, and jazz singer who performed with some of the twentieth century’s most celebrated musicians, from Louis Armstrong to Bob Dylan. A proud progressive who has tirelessly championed racial equality and economic justice in America, and who has traveled the world to sing out against war and tyranny. An organizer, a venue owner, a record label founder, and a woman who has charted her own creative and political path for more than ninety years. Barbara Dane has led an epic, trailblazing life in music and activism, and This Bell Still Rings tells her story in her own adventurous voice. Dane’s memoir charts her trajectory from singing in union halls and at factory gates in World War II–era Detroit, to her rise as a respected blues and jazz singer, to her prominence as a folk musician frequently performing at and participating in civil rights and peace demonstrations across the US and abroad—from post-revolutionary Cuba to wartime Vietnam. This Bell Still Rings illuminates “one of the true unsung heroes of American music” (Boston Globe), and it offers a wealth of inspiration for artists, activists, and anyone seeking a life defined by courage and integrity.

BABARA DANE, born in 1927, is an American folk, blues, and jazz singer-songwriter. She was prominent in the movements for peace and justice as the struggle for civil rights spread and opposition to the Vietnam War mounted, singing at demonstrations throughout the United States and all over the world. In 1966 she became the first US musician to tour post-revolutionary Cuba. By the early 1970s Dane had started Paredon Records with her husband, the late Irwin Silber, in their adopted hometown of Oakland, California. Specializing in international protest music, she produced fifty albums, including three of her own. The label is now part of Smithsonian Folkways. Dane is the recipient of numerous honors, and the New York Times featured a full-page profile of her in 2021. Bob Dylan said of her: “The world needs more people like Barbara, someone who is willing to follow her conscience. She is, if the term must be used, a hero.”