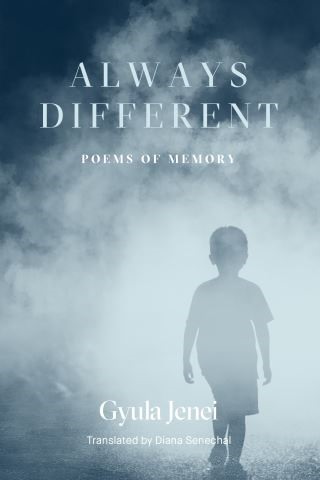 The poems in Jenei’s collection Always Different: Poems of Memory grapple with childhood, memory, and time. The poet looks back forty years and imagines himself as a boy—the narrator of the poems—looking forward into the future. Thus the poems combine moments with sweeps of time, village scenes with rumblings of societal and technological change. In the tradition of Hungarian writers Tamás Nádas and Ágota Kristóf, Jenei grapples with war and destruction, loneliness, desire, and loss. The literary historian Éva Bánki calls Jenei “one of the great masters of Hungarian free verse”—adding that his poems also hold an epic theme, “the strange underworld of the Kádár era, rural Hungary shown through a child’s eye.” Through their storytelling, searching, and rhythms, these poems take us into our communal yet private longing for self-knowledge, history, and home.

Gyula Jenei (born in 1962 in Abádszalók, Hungary) is a poet, writer, editor, and educator. As founder and editor of the quarterly literary magazine Eső (translatable as “Rain” or “Falling”), he has brought literature and literary events to the Szolnok area for over twenty years. His poems and other writings comprise thirteen books.

Diana Senechal, a writer, translator, and educator, is the 2011 winner of the Hiett Prize in the Humanities, awarded annually by the Dallas Institute of Humanities and Culture. Her translations of the Lithuanian poems of Tomas Venclova have been published in two books, Winter Dialogue (Northwestern University Press, 1997) and The Junction (Bloodaxe, 2008). Since July 2011, , she has served on the faculty of the Dallas Institute’s Sue Rose Summer Institute for Teachers. Senechal teaches English, American civilization, and British civilization at the Varga Katalin Gimnázium in Szolnok, Hungary.