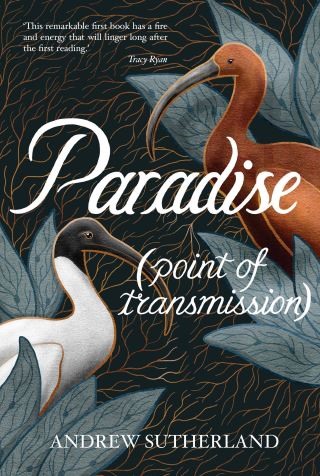 Paradise (point of transmission) is a poetry collection placed within a sequence of physical and psychic transitional spaces: from seronegative to seropositive; from ‘adopted' Singaporean to the poet finding his place again as an adult in the Perth of his childhood; and from being secretive about his HIV-status (in which the art he produced was rooted in the trauma of HIV transmission without naming it), towards living a more public life, in which living openly with HIV is characterised by the queer longing toward both resilience and transformation.

Andrew Sutherland: Andrew Sutherland is a Queer poz (PLHIV) writer and performance-maker creating work between Boorloo, Western Australia and Singapore. Hiswork draws upon intercultural and Queer critical theories, and the vital instabilities of identity, pop culture and the autobiographical self. He wasawarded Overland's Fair Australia Poetry Prize 2017 and placed third in FAWWA's Tom Collins Prize 2021. He is grateful to reside on Whadjuk Noongar boodja.