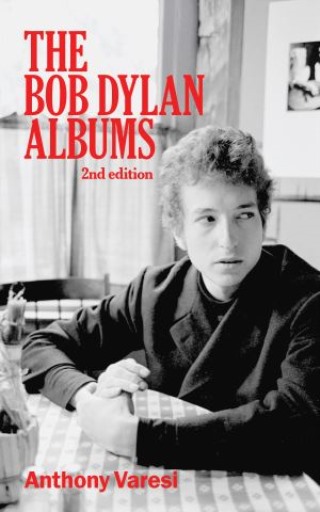 Bob Dylan has created a body of work unparalleled in popular music. As a songwriter and as a singer, Dylan expanded the boundaries for song. In this substantially revised and updated second edition of The Bob Dylan Albums, Anthony Varesi analyzes the massive Dylan canon through a detailed discussion of each of the artist’s officially released albums. The book follows Dylan’s career chronologically from 1962’s Bob Dylan through to 2021’s Bootleg Series release Springtime in New York. All of Dylan’s studio albums, live albums, collections and archival releases are examined in the text and in the detailed, annotated, cross-referenced discography, as are Dylan’s notable soundtrack contributions, side projects and benefit concert appearances.

The Bob Dylan Albums, 2nd Edition also discusses Dylan’s other writings, such as Chronicles and his Nobel Prize lecture, and reviews the films Dylan has appeared in or been the subject of. The book contains frank analyses of the more controversial aspects of Dylan’s career, including songs Dylan wrote about George Jackson, Rubin “Hurricane” Carter, Joey Gallo and Lenny Bruce, the use of Dylan’s music in advertisements, and Dylan’s 2011 trip to China.

The book looks at recurring themes in Dylan’s songs, the influence of other artists on Dylan’s music, and the ongoing relevance of Dylan’s work. In the process, The Bob Dylan Albums, 2nd Edition unearths new meaning in both Dylan’s most famous works and in his songs and albums that have received less attention..

Anthony Varesi has a Bachelor of Arts degree from the University of British Columbia, where he studied history and American and English literature, and a Bachelor of Laws degree from the University of Saskatchewan. The first edition of The Bob Dylan Albums was published by Guernica Editions in 2002. A French translation, Bob Dylan au fil des albums (1962-2001), was published by Triptyque in 2006. Anthony works as a Federal prosecutor and lives in Kamloops, British Columbia with his wife and their son.