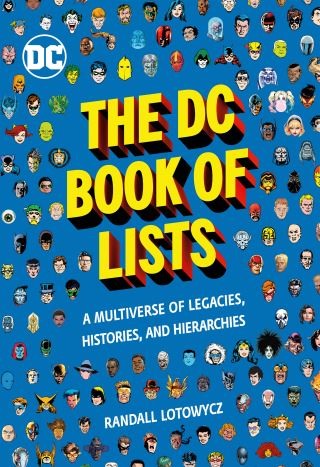 The DC Book of Lists

A Multiverse of Legacies, Histories, and Hierarchies

Packed with 100+ inventive groupings, hierarchies, and infographics, The DC Comics Book of Lists offers a creative way of looking at both the well-known and obscure histories of the top heroes and villains from the DC Universe across 80+ years.

Each entry in this book celebrates another corner of DC's past, present, and future. It revels in the rich tapestry of DC's characters and history. Or histories, for that matter. Each first meeting of Batman and Superman is listed, as are highlights of Hawkman's many reincarnations and Jimmy Olsen's amusing and peculiar transformations. Harley Quinn’s most peculiar career choices? They make quite a resume. The DC Comics Book of Lists also has a chronological list of artificial intelligence, from the 2nd century to the 823rd—with Metal Men, Brother Eye, and Computo along the way—and a Mount Olympus family tree presents Wonder Woman’s expansive list of relatives. Legacy characters like the Flash and Green Lantern are highlighted, profiling each character to don the mantle, and Suicide Squad members are memorialized in a breakdown of who was killed on each mission. From superheroes and villains with tattoos to the many cats prowling around the DC multiverse, you’ll find a surprise or two on every page.

Illustrated with full-color comic book art throughout, each page of The DC Comics Book of Lists presents a new discovery or way of looking at cherished characters.

Randall Lotowycz:
Randall Lotowycz lives with his family in Brooklyn. During the day, you can find him in the West Village where he works as a marketing and sales director for a book publisher. He is a lifelong film and comic book aficionado who can prattle on about both subjects for hours. He also enjoys tattoos and cats. Randall earned a MFA in Creative Writing from the New School. He is the Wall Street Journal best-selling author of the DC Comics Super Heroes and Villains Fandex, and, more recently, Superhero Playbook from duopress. His work has been featured in DC Comics and IDW Comics publications. Learn more about him at www.RandallJL.com.