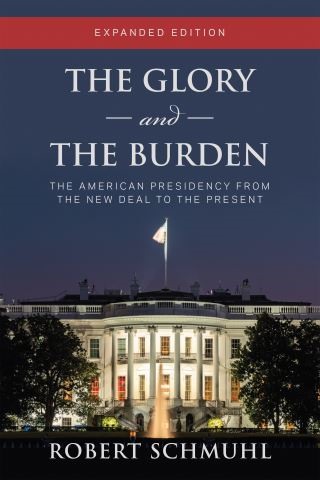 The Glory and the Burden

The American Presidency from the New Deal to the Present, Expanded Edition

Robert Schmuhl chronicles the American presidency for nearly a century, providing a compelling picture of how the functions of the office and who occupies it have changed over the decades.

The Glory and the Burden: The American Presidency from the New Deal to the Present is a timely examination of the state of the American presidency and the forces that have shaped it since 1933, with an emphasis on the dramatic changes that have taken place within the institution and to the individuals occupying the Oval Office. A new chapter and other elements have been added to the book, which originally appeared in the fall of 2019. This expanded, updated edition probes the election of Joe Biden in 2020, the transition of the White House from Donald Trump to Biden, and Biden’s first several months in office.

Robert Schmuhl traces the evolution of the modern presidency back to the terms of Franklin Roosevelt, maintaining that FDR’s White House years had a profound impact on the office, resulting in significant changes to the job and to those who’ve served since then. Specifically, the Twenty-Second Amendment to the Constitution, limiting a president to two terms, has largely redefined each administration’s agenda. News sources and social media have also grown exponentially, exercising influence over the conduct of presidents and affecting the consequences of their behavior.

Schmuhl examines the presidency as an institution and the presidents as individuals from several different perspectives. The Glory and the Burden is an engrossing read for a general audience, particularly those with an interest in politics, American history, and communications.