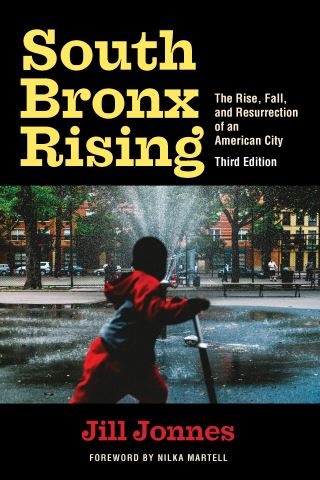 The Rise, Fall, and Resurrection of an American City

Thirty-five years after this landmark of urban history first captured the rise, fall, and rebirth of a once-thriving New York City borough—ravaged in the 1970s and ’80s by disinvestment and fires, then heroically revived and rebuilt in the 1990s by community activists—Jill Jonnes returns to chronicle the ongoing revival of the South Bronx. Though now globally renowned as the birthplace of hip-hop, the South Bronx remains America’s poorest urban congressional district. In this new edition, we meet the present generation of activists who are transforming their communities with the arts and greening, notably the restoration of the Bronx River. For better or worse, real estate investors have noticed, setting off new gentrification struggles.

Jill Jonnes: Jill Jonnes holds an M.S. from Columbia Journalism School and a Ph.D. in American History from Johns Hopkins University. She is the author of Empires of Light: Edison, Tesla, Westinghouse, and the Race to Electrify the World; Conquering Gotham: Building Penn Station and Its Tunnels; and Urban Forests: A Natural History of Trees and People in the American Cityscape.