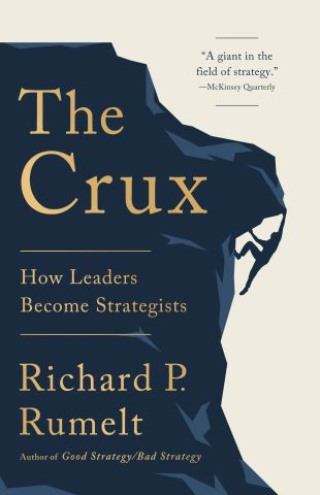 The paradigm-busting theory for doing strategy.

What passes for strategy in too many businesses, government agencies, and military operations is a toxic mix of wishful thinking and a jumble of incoherent policies. Richard P. Rumelt’s breakthrough concept is that leaders become effective strategists when they focus on challenges rather than goals, pinpointing the crux of their pivotal challenge—the aspect that is both surmountable and promises the greatest progress—and taking decisive, coherent action to overcome it.

Rumelt defines the essence of the strategist’s skill with vivid storytelling, from how Elon Musk found the crux that propelled the success of SpaceX to how the American military came to grips with the weaknesses of its battle strategy. Musk’s core challenge, for example, was rocket reusability. His intense focus on the soft landing of SpaceX’s rockets enabled them to be used again—radically reducing the cost of putting a pound in orbit. Musk’s strategy was not based on how value is created or how to position SpaceX in its industry. It was a design foraction, the mental maneuver that focuses energy on what really made a difference through understanding the crux and creating an effective response that led to breakthrough.

Richard P. Rumelt: Richard P. Rumelt is one of the world’s most influential thinkers on strategy and management. McKinsey Quarterly described him as “strategy’s strategist” and “a giant in the field of strategy”. He is the author of Good Strategy/Bad Strategy: The Difference and Why It Matters,” reviewed by the Financial Times as “the most interesting business book of 2011” and by Strategy + Business as “the year’s best and most original addition to the strategy bookshelf." Dr. Rumelt received his doctoral degree from Harvard Business School and is Professor Emeritus at the UCLA Anderson School of Management where he held the Kunin Chair.