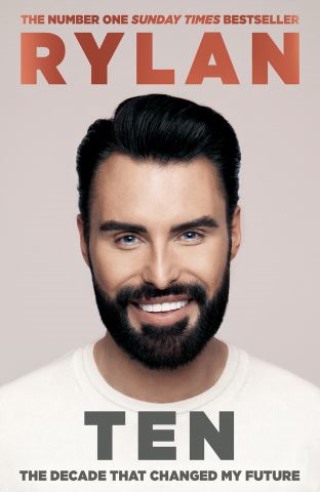 TEN: The decade that changed my future

Funny and outspoken, Rylan is one of the UK's most-loved presenters and a true household name. Rylan first emerged on our screens in September 2012 and in the ten years since then has become a one-of-a-kind national treasure.

In this brand-new memoir, Rylan invites us deeper into his world to reflect on all the things he's learnt from a decade in the limelight, whilst also pulling back the curtain on his personal journey. Covering everything from fame and celebrity to his mental health and identity, family and relationships to his love of reality TV, he recounts his life lessons with humour, candour and a huge amount of heart. From the moments that have shaped him to the mistakes that have made him, and the unusual pastimes that have obsessed him along the way.

With unforgettable stories about his rise to fame, his biggest regrets and his special bond with his beloved mum, TEN: The decade that changed my future is as warm and honest, enormously entertaining and full of surprises as its brilliant Sunday Times bestselling author.

This is Rylan as you've never seen him before - an intimate, fascinating and joyful insight into an extraordinary ten years on the telly and in our hearts.

Award-winning television presenter, radio DJ, podcaster and number one bestselling author Rylan initially burst onto our screens in 2012 in the ninth series of The X Factor. After taking the nation by storm with his larger-than-life performances, Rylan entered and won the eleventh series of Celebrity Big Brother in 2013. Since then, Rylan has carved out a successful media career, as both a presenter and a guest across a range of popular TV, radio and podcast shows. Now ten years on, he is one of the UK's favourite broadcasters, best known for his work on This Morning, Strictly: It Takes Two, Celebrity Gogglebox, Eurovision Song Contest, Big Brother's Bit on the Side and as the host of BBC Radio 2's Rylan on Saturday.

His new book, TEN: The decade that changed my future, is an honest and heartfelt account of all things he's learnt from a decade in the limelight.