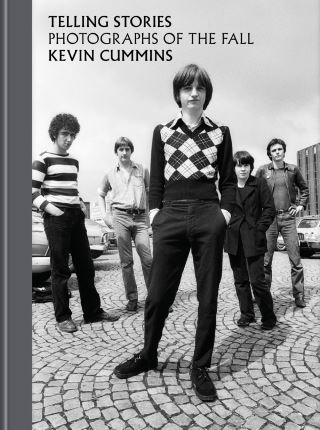 Photographs of The Fall

'No one has captured the look of alternative UK music over the past half a century more tellingly than Kevin Cummins.' - Simon Armitage

'Kevin Cummins is a true master in being able to capture the essence of music, the soul of the band. Whatever he does however he does it is a mystery to me but it's pure genius.' - Rankin

'Few photographers had such a close connection to The Fall as Manchester-based Kevin Cummins, and his new book, Telling Stories, is a rich visual history of one of the city's most beloved and enduring bands.' - Record Collector Magazine

'Kevin has the uncanny ability of capturing the inner mood of musicians. Be it the dynamics within a pensive Joy Division, or the sense surrounding the fledgeling Fall that something special was around the corner for us all. Kevin's book is nothing less than a remarkable document of a bewildering and defiant anti-fashion movement born in Prestwich, north Manchester in the grimy mid-70s.' - Marc Riley

'Capturing forty years of the band's career via his archive, the legendary photographer (whose recent book, Juvenes, documented the story of Joy Division) gives his take on the phenomenon of The Fall and the late, great Mark E. Smith.' - Vive le Rock

From chaotic early gigs to their final years, NME photographer Kevin Cummins provides a definitive, unique perspective on cult favourites The Fall. In this stunning visual history spanning four decades, discover how and why they emerged as one of the most innovative, boundary-breaking bands in modern music.

With a foreword by Poet Laureate and Fall fan Simon Armitage and an interview with Eleni Poulou, as well as never-before-seen images from Cummins' archive, this is the ultimate visual companion to The Fall.

Manchester-born Kevin Cummins has an international reputation as one of the world's leading photographers and is famed for his iconic portraits of musicians including Ian Curtis, Bowie, The Smiths, Iggy Pop, Bjork, Debbie Harry, Bob Marley, Public Enemy, Patti Smith and Oasis. These photographs have appeared on magazine covers and in galleries and museums worldwide, including: Brooklyn Museum, Sydney Opera House, Pace Gallery, and other cities including New York, Los Angeles, Buenos Aires, Berlin, London, and Bologna. His work is included in the permanent collections of the National Portrait Gallery, V&A Museum and Manchester City Art Gallery.

Cummins had a 20 year association with British Rock 'bible' NME , where he created many of the best-known images in modern music history. He was awarded an honorary doctorate (arts) by Manchester Metropolitan University in 2015. His monographs for Octopus include Joy Division: Juvenes, Morrissey: Alone and Palely Loitering, Britpop: While We Were Getting High and the just-published Telling Stories: Photographs of The Fall.