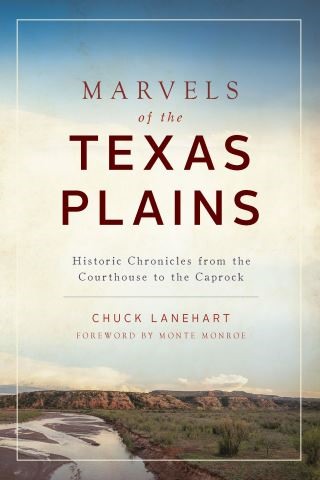 Marvels of the Texas Plains

Historic Chronicles from the Courthouse to the Caprock

Assemble a composite portrait of the Texas plains through these historic tales.

Many thousands of years ago, Clovis Man hunted huge mammoths here. More recently, Waylon Jennings drew his musical inspiration here. In the intervening time, the Texas prairie has been the backdrop for the wildest of Wild West shootouts, landmark legal battles and epic achievements in sports, music and medicine. Familiar icons like Roy Orbison and Dan Blocker, as well as forgotten characters like Charlie "Squirrel-Eye" Emory and John "the Catfish Kid" Gough all helped shape the colorful history of the Texas Plains. Who shot the sheriff? Who was the earliest American? Who invented the slam dunk? Author Chuck Lanehart answers these questions and many more in a wide-ranging collection of stories.

Chuck Lanehart: Chuck Lanehart is a criminal defense lawyer based in Lubbock, Texas. Thirty-plus years ago, he began writing about the rich legal and cultural history of the region. His history essays have been featured in many publications, including legal journals and newspapers. Westerners International honored him with the Coke Wood Award for Best Published Article of 2020. In 2021, The History Press published his first book, Tragedy and Triumph on the Texas Plains: Curious Historic Chronicles from Murders to Movies. The Lubbock Avalanche-Journal named him among the "200 Most Influential People in the History of Lubbock" in 2008.