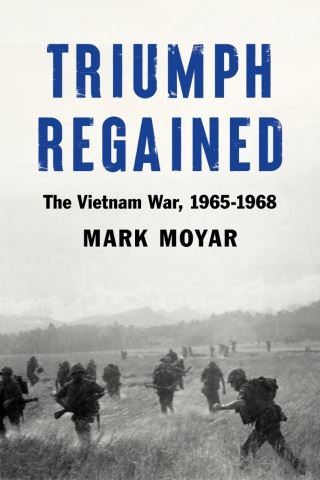 Triumph Regained: The Vietnam War, 1965–1968 is the long-awaited sequel to the immensely influential Triumph Forsaken: The Vietnam War, 1954–1965. Like its predecessor, this book overturns the conventional wisdom using a treasure trove of new sources, many of them from the North Vietnamese side. Rejecting the standard depiction of U.S. military intervention as a hopeless folly, it shows America’s war to have been a strategic necessity that could have ended victoriously had President Lyndon Johnson heeded the advice of his generals. In light of Johnson’s refusal to use American ground forces beyond South Vietnam, General William Westmoreland employed the best military strategy available. Once the White House loosened the restraints on Operation Rolling Thunder, American bombing inflicted far greater damage on the North Vietnamese supply system than has been previously understood, and it nearly compelled North Vietnam to capitulate.

The book demonstrates that American military operations enabled the South Vietnamese government to recover from the massive instability that followed the assassination of President Ngo Dinh Diem. American culture sustained public support for the war through the end of 1968, giving South Vietnam realistic hopes for long-term survival. America’s defense of South Vietnam averted the imminent fall of key Asian nations to Communism and sowed strife inside the Communist camp, to the long-term detriment of America’s great-power rivals, China and the Soviet Union.

Mark Moyar: Mark Moyar holds the William P. Harris Chair in Military History at Hillsdale College. His past academic appointments include the Kim T. Adamson Chair of Insurgency and Terrorism at the U.S. Marine Corps University and fellowships at the Joint Special Operations University and Texas A&M University. During the Trump administration, he served in the U.S. Agency for International Development as the Director of the Office of Civilian-Military Cooperation. The author of six previous books on military history, diplomatic history, grand strategy, leadership, and international development, he has also written articles for the New York Times, the Washington Post, the Wall Street Journal, and many other publications. The first volume of his Vietnam War trilogy, Triumph Forsaken: The Vietnam War, 1954-1965, was published in 2006, and it became the subject of an essay collection entitled Triumph Revisited: Historians Battle for the Vietnam War. He received a B.A. summa cum laude from Harvard and a Ph.D. from Cambridge.