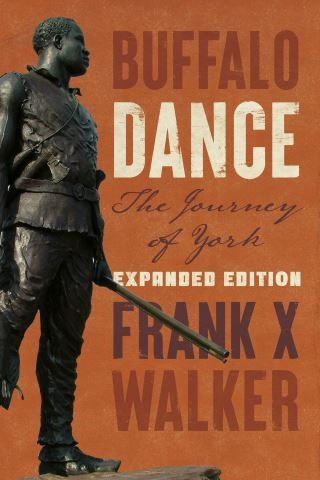 The Journey of York

When Frank X Walker's compelling collection of personal poems was first released in 2004, it told the story of the infamous Lewis and Clark expedition from the point of view of York, who was enslaved to Clark and became the first African American man to traverse the continent. The fictionalized poems in Buffalo Dance form a narrative of York's inner journey before, during, and after the expedition—a journey from slavery to freedom, from the plantation to the great Northwest, from servant to soul yearning to be free.
In this expanded edition, Walker utilizes extensive historical research, interviews, transcribed oral histories from the Nez Perce Reservation, art, and empathy to breathe new life into an important but overlooked historical figure. Featuring a new historical essay, preface, and sixteen additional poems, this powerful work speaks to such themes as racism, the power of literacy, the inhumanity of slavery, and the crimes against Native Americans, while reawakening and reclaiming the lost "voice" of York.

Frank X Walker: Frank X Walker, the first African American writer to be named Kentucky Poet Laureate, is an artist, writer, educator, and has published eleven collections of poetry, including Masked Man, Black: Pandemic & Protest Poems, Turn Me Loose: The Unghosting of Medgar Evers, which was awarded an NAACP Image Award and the Black Caucus American Library Association Honor Award. He is also the author of the forthcoming A is for Affrilachia. The recipient of the 35th Annual Lillian Smith Book Award and the Thomas D. Clark Award for Literary Excellence, he is a founding member of the Affrilachian Poets.