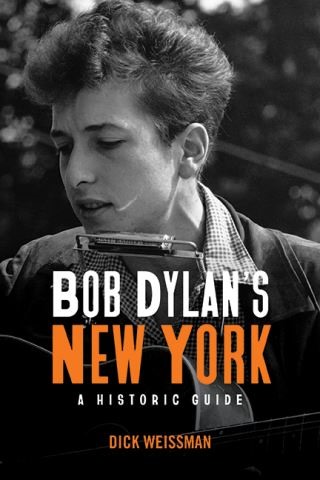 Bob Dylan’s New York is a guidebook and a history of New York's key role through Dylan's lengthy career. It places Dylan’s early career in the storied history of Greenwich Village, a hotbed of new developments in the arts. A contemporary of Dylan’s, author Dick Weissman walked the same streets, played music in the same venues, and witnessed the growth of the folk music revival from before Dylan became popular to after the height of his impact on the music scene. The book features ten easy-to-follow walking maps and historic photographs, allowing the reader to retrace Dylan’s footsteps and simultaneously experience Dylan’s New York and contemporary New York. It also goes beyond the Village to include the many areas of the city where Dylan lived and worked, as well as the storied time he spent in Woodstock. Combining cultural history with personal history and anecdotes, Bob Dylan’s New York illuminates the life and times of this seminal artist.

Dick Weissman: Dick Weissman is Associate Professor Emeritus at the University of Colorado Denver. He is the author of Which Side Are You On? An Inside History of the Folk Music Revival in America.