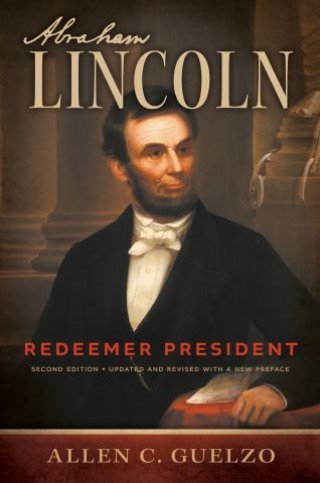 The story of Abraham Lincoln’s faith and intellectual life—updated and revised with a new preface—from the three-time winner of the Lincoln Prize and best-selling Civil War–era historian Allen Guelzo.

Allen Guelzo’s peerless account of America’s most celebrated president explores the role of ideas in Lincoln’s life, treating him as a serious thinker deeply involved in the nineteenth-century debates over politics, religion, and culture. Through masterful and original scholarly work, Guelzo relates the outward events of Lincoln’s life to his inner spiritual struggles and sets them both against the intellectual backdrop of his age. The sixteenth president emerges as a creative yet profoundly paradoxical man—possessed of deep moral and religious character yet without adherence to organized religion.

Since its original publication in 1999, Abraham Lincoln: Redeemer President has garnered numerous accolades, not least the prestigious Lincoln Prize. After writing several other acclaimed studies of Lincoln and other aspects of Civil War–era history, Guelzo returns to update this important early work for a second edition. A new preface addresses the developments in Lincoln scholarship in the years since the book’s original publication and offers Guelzo’s fascinating retrospective look at the unusual path he took to becoming a Lincoln scholar.

Allen C. Guelzo:
Allen C. Guelzo is a New York Times best-selling author, senior research scholar in the Council of the Humanities at Princeton University, and the director of the Initiative on Politics and Statesmanship for Princeton's James Madison Program in American Ideals and Institutions. He has published several works on Civil War-era history, including Robert E. Lee: A Life, Gettysburg: The Last Invasion, Fateful Lightning: A New History of the Civil War and Reconstruction, and Lincoln's Emancipation Proclamation: The End of Slavery in America.